In Texas Driving Like a Woman May Just Save Your Life 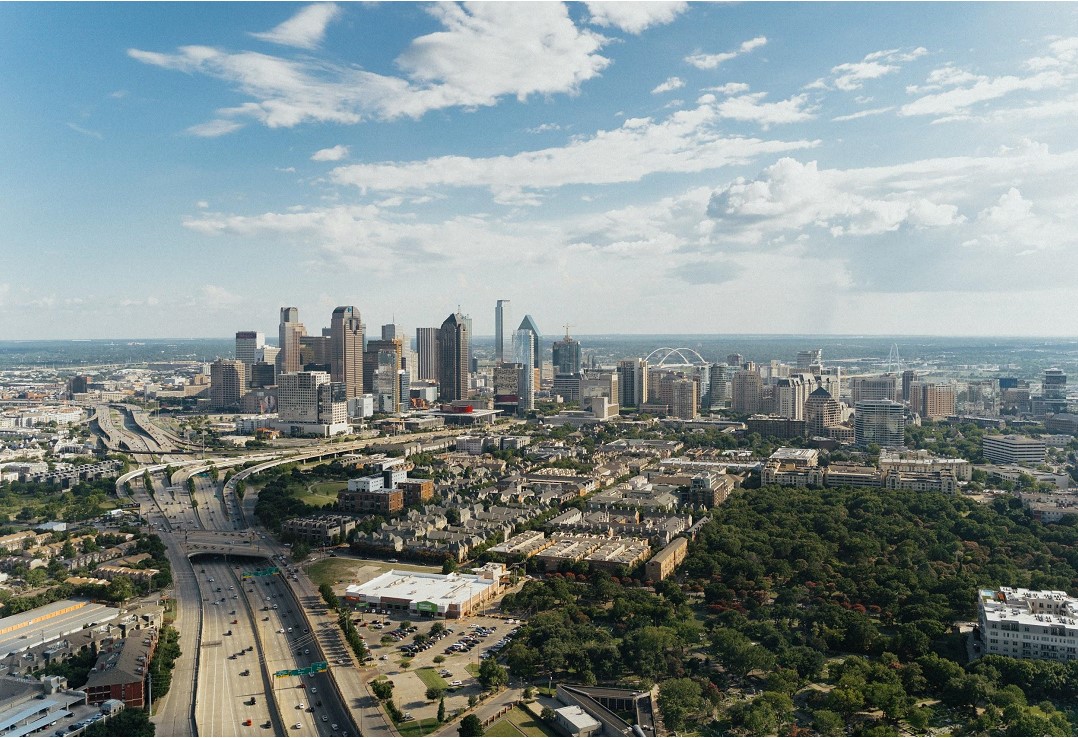 Women drivers just got one more point for their team in Texas. When it comes to driving in the US, a 2019 article found that 3 cities in the state of Texas were among the safest in the country. Despite these positive rankings, a large gender divide exists when it comes to the number of fatal car accidents men and women are involved in the Lone Star State. A new study out from The Benton Law Firm found that more men than women are involved in fatal car accidents. This report looked into the larger factors precipitating this gender gap.

Why Benton commissioned the study

The Benton Law Firm is specialized in personal injury law and wanted to commission a study to better evaluate road safety in the state. “It’s all about changing consciousness and all of us doing our small part,” says Jeff Benton, founder of the Dallas-based law firm.

“If we can reduce the number of fatal accidents in Texas by even one, then my team and I will be extremely happy,” he adds.

The study also helps improve the educational component of legal practise, and outlining what to focus on.

“It’s all about changing consciousness about what is acceptable driving behavior and what are the leading causes of accidents,” he says. “It’s also important to start with younger generations and change that mindset early.”

What the study found

Benton focused on data within a 5 year period. Between 2012 to 2017, based on information gathered from the National Highway Traffic Safety Administration (NHTSA), researchers found that men were more likely than women to be in fatal car accidents. In 2017 alone, Texas experienced a significant increase in the number of car crashes with over 4,000 in just that one year.

“Although this study doesn’t explore it, I think that if you correct for number of miles traveled, you’ll find that women get involved in a similar number of incidents but they tend to happen at lower speeds and therefore cause fewer fatalities,” says John Oliver Coffey, lead researcher on the study.

Men are more involved in accidents than women 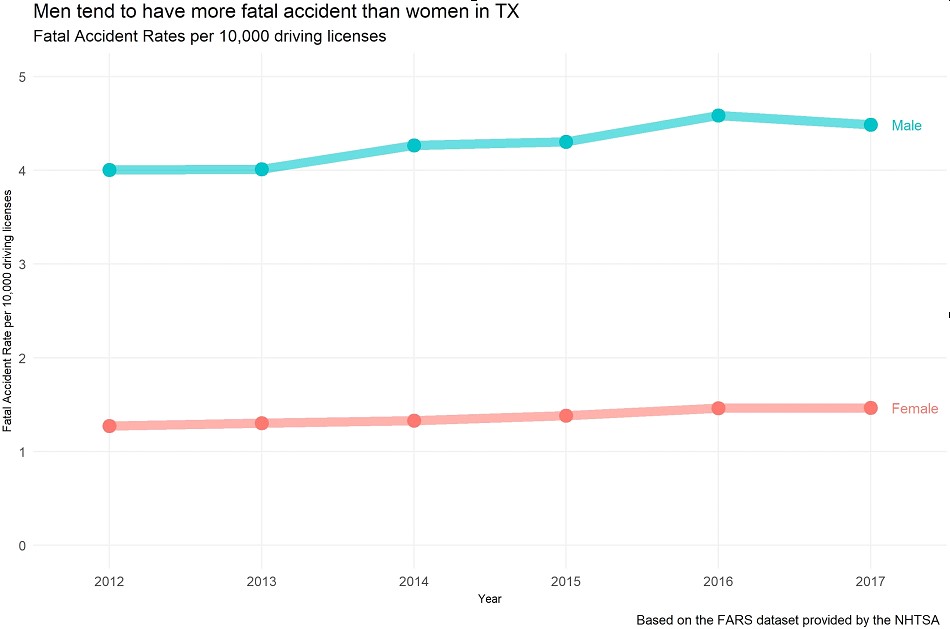 This is also true for those riding motorbikes, specifically Harley Davidson vehicles.

Men have more accidents on Harley Davidson bikes than women 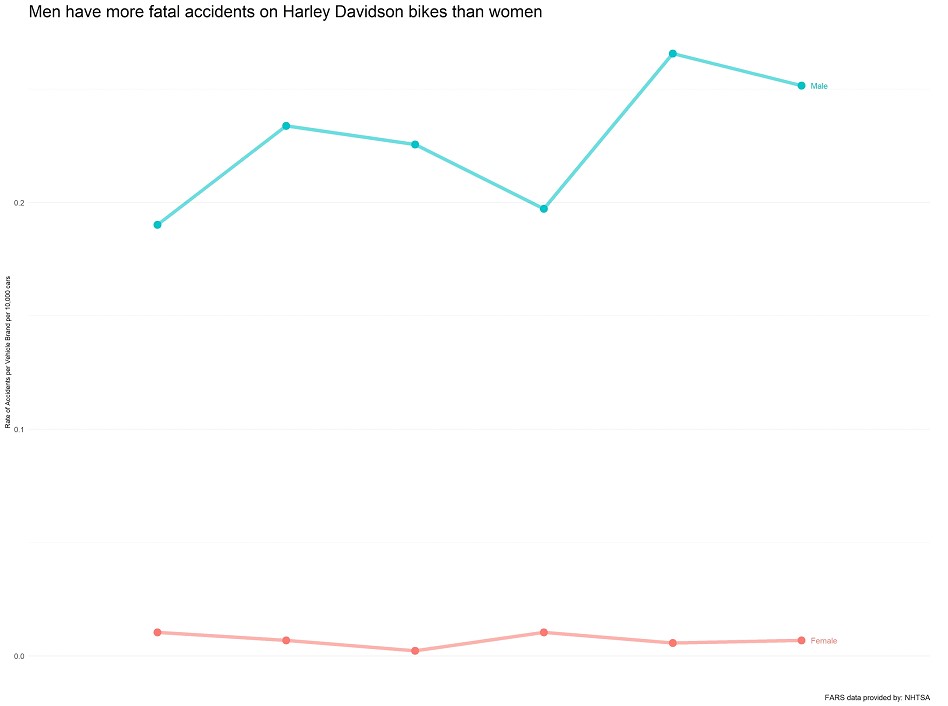 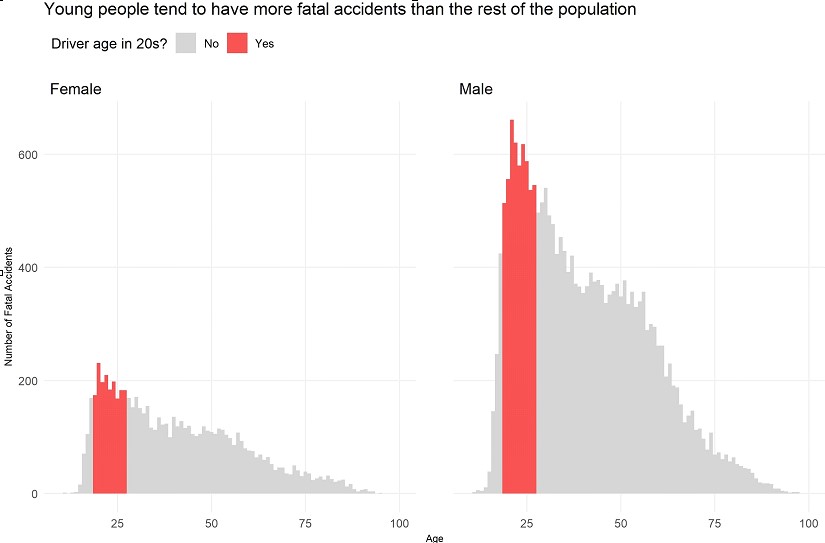 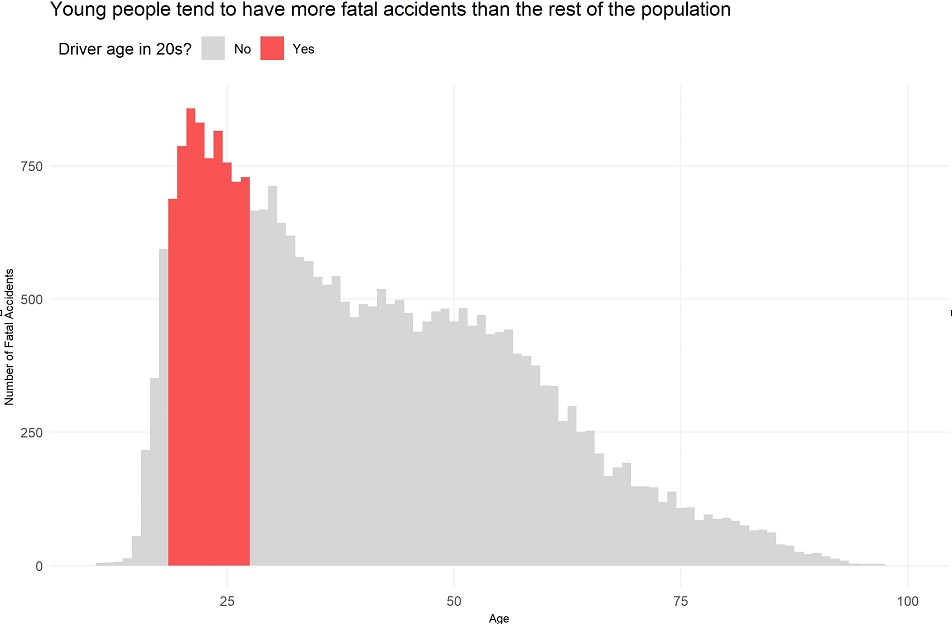 The data was collected between 2012-17 found that on average Texas has had over 3,000 accidents yearly; making it the state with the most deadly accidents in the US. However, given the size of the state the number of accidents was not unexpected due to its population per capita. California and Florida, two states that are of a similar size, followed Texas in the ranking when it came to the number of deadly accidents per capita. 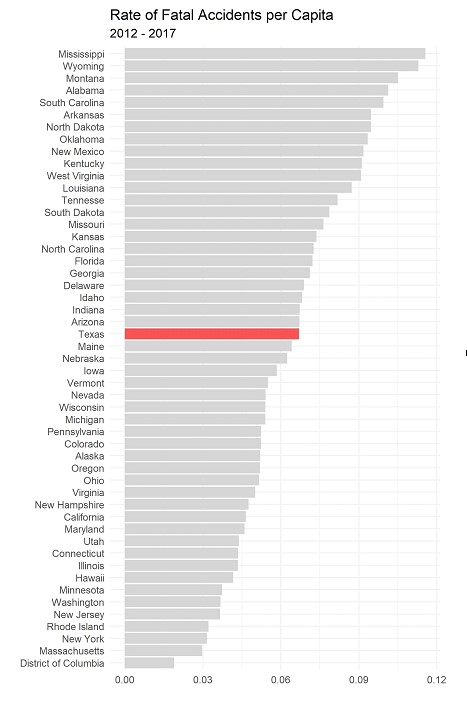 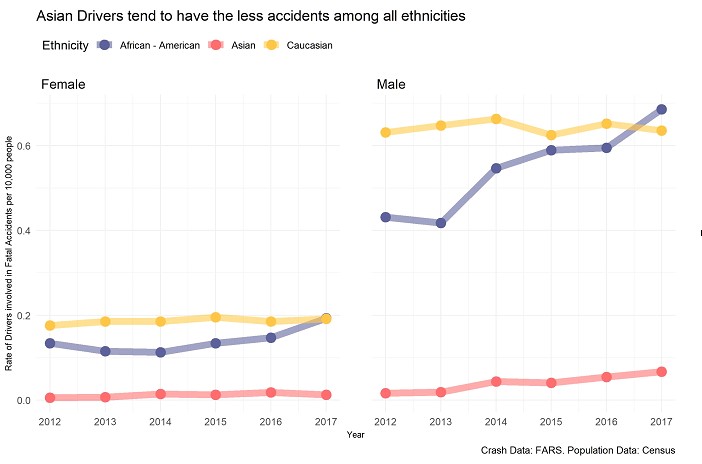 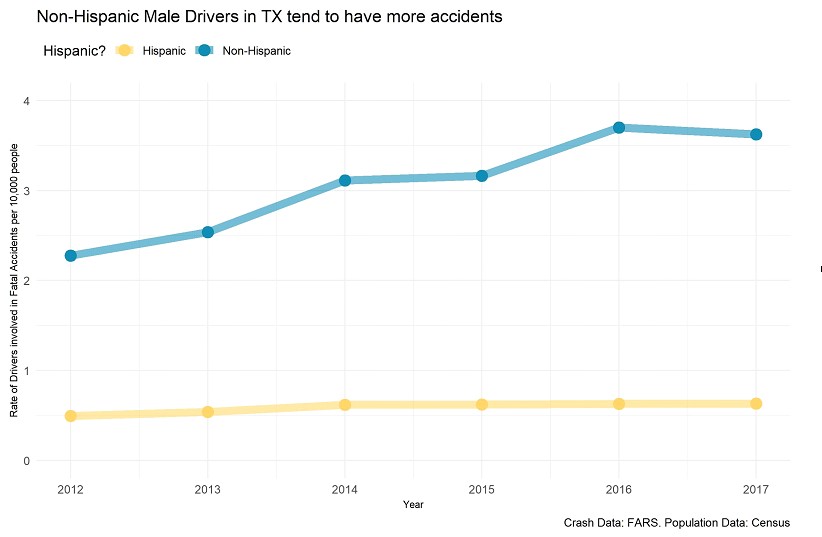 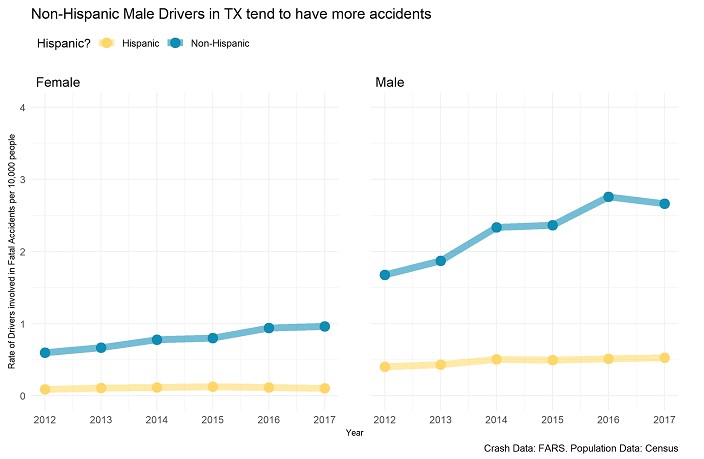 Drunk driving did have an overall effect on the number of fatalities and it is seasonal. Summer is the season with the most drunk drivers involved in fatal accidents. It is also the season with the most drunk drivers every year since 2012. Drunk driving accidents are most common on Saturday and Sunday, but not on Friday. Summer and Fall tend to have more accidents than Winter and Spring overall.

If you’d like to set up an interview with John Oliver Coffey, the lead researcher on the study, please email hi@datapico.com or call (201) 793 7234.

About the Benton Law Firm Study

The study looked at contemporary academic research as well as public data on climate, traffic accidents, population, and vehicles. Once the data was compiled researchers ran validations to check for anomalies around issues such as completeness, consistency, conformity and accuracy. Then each dataset was studied for trends, outliers, notable behaviors and analyzed for correlations and possible drivers of traffic accidents. The research team included programmers, data analysts, veteran journalists, and data designers.

The Benton Law Firm is a personal injury law firm in Dallas, Texas. The firm is specialized in vehicle accidents including car, truck, motorcycle, boat, and bicycle. Benton commissioned the study to research road safety and accident patterns in Texas in an effort to improve road safety.

FARS: Fatality Analysis Reporting Systems (FARS) is a nationwide census that provides the American public and NHTSA with information with yearly data on fatal injuries that occur as a result of motor vehicle-related accidents. They are part of the United States Department of Transportation and work in tandem with other offices to gather information on this topic. The most recently available data from FARS was used in the study.